Did ancient hominids bury their dead?

Yesterday, I told you how Homo naledi was discovered. To refresh your memory, check out this picture:


Today, we'll discuss why this find was so important.

The very fact that so many bones were found in one place was critical. The six paleontologist spelunkers retrieved over 1500 bone fragments which were later assembled into at least 15 skeletons. That means that the researchers had specimens of different ages and of both genders, an almost unheard of scientific find. This gave anthropologists an unusually accurate picture of what these creatures were like.

Thus, we know that H. naledi's physical features place it between those found in the genera Australopithecus and Homo.

We don't yet know how old those bones are, which means we can't be sure where H. nelida falls on our family tree. H. nelida seems to be intermediate between Austrolopithecus and Homo, but could have been contemporaneous with most of the species within those genera. Dating the fossils is going to give us critical information on how and when different modern physical traits first appeared.

Just as importantly, how did those bones find their way into that remote cavity? Consider that although there were so many H. naledi bones in the cave, virtually no other species were found along side them. This was not a lair used by predators, hominid or otherwise, nor was the accumulation of bones due to flooding or other natural causes. There were no marks of damage or scavenging on the bones, so the cave was not the site of a slaughter or feast. And remember that the chamber where the bones were found is extremely hard to access.

Lead researcher Lee Berger's working hypothesis is that the bodies were deliberately placed in the chamber, most likely by dropping them in from above. We have a name for procedures like this: it's called 'burial', and it's not an activity we would have associated with creatures that had brains the size of gorillas.

Berger and the other researchers are continuing to study the fossils. Many more interesting conclusions are sure to come out of this amazing find. You can find some great photographs as well as an artist's rendition of the creatures giving a dead relative the old heave-ho in the National Geographic story by Jamie Shreeve.

We have a new member of the human family tree and I don't know which is more wonderful: the way Homo naledi was found or all the things we'll learn about our own evolution thanks to this discovery.

Today, let's take a look at the discovery itself, which took place in October, 2013. We'll cover what this means tomorrow.

Lee Berger, a National Geographic Explorer-in-Residence, decided that it had been too long since he last explored. Five years earlier he (along with his then nine year old son) discovered Australopithecus sediba, a two million year old hominid, and had spent the intervening years analyzing that find. In 2013, he decided it was high time he got back in the field.

In Berger's case, the field turned out to be the Rising Star Cave system in South Africa. There, a caver named Steve Tucker inadvertently discovered a chamber full of hominid bones. Unfortunately, that chamber was extremely hard to access. Tucker and his fellow caver Rick Hunter lacked the expertise to safely collect the fossils, and Berger himself couldn't even get to the chamber. Take a look at the graphic below to see why.

Safely removing the fragments without crushing the fragile pieces of bone or getting in each other's way was a delicate task requiring yoga poses and cramping muscles. And that was after they made their way into the chamber.


Nonetheless, the 'underground astronauts' mostly Ph.D. students in anthropology, were all reluctant to leave at the end of their two hour shifts, often doubling or even tripling their time in the chamber.

Tomorrow: what we've learned from this find.
Posted by Unknown at 7:59 AM 14 comments:

It turns out that teenagers were right all along when they complain that high school starts too early. That actually isn't news to anyone who has had to drag an adolescent out of bed in the morning. However, the recommendations made by Paul Kelley of Oxford University and his colleagues may surprise you. They suggest that 18 year olds start school at 11:00 am.

First though, why is it that teenagers have so much trouble getting out of bed in the morning? The simple answer is that they can't get to sleep at night. This isn't a demonstration of lack of character but rather of biology, or more specifically of circadian rhythms. Every cell in our bodies is tuned to a 24 hour cycle, and the master controller for all our cells resides in the hypothalamus. The sleep-wake cycle happens to be an extremely vulnerable part of that 24 hour cycle. Throughout the day, we excrete competing hormones and neurotransmitters that increase either alertness or sleepiness. In adolescents, it just takes longer to reach a critical mass of sleepiness signals than it does in older adults. Thus, going to bed earlier doesn't help teenagers get more sleep. They are wide awake until late in the evening no matter what time they go to bed.

This means that when students get ready for school in the morning, they're likely to have had much less sleep than they need. A typical 15 year old gets less than 7.5 hours sleep on a school night, but over nine hours on a weekend when he's free to sleep as long as he wants. This has repercussions not only for learning, but for health and safety. Sleep-deprived people are at greater risk for emotional problems, depression, weight gain and even car crashes.

The researchers based their conclusions on sleep pattern studies that show that 10 year-olds tend to wake up naturally at 6:30 am, 16 year-olds at 8:00 am and 18 year-olds at 9:00 am, and allowed each group two hours between wake time and start of school. Therefore, according to them, fifth grade should start at 8:30 am and high school at either 10 or 11 am. Personally, I think two hours to get ready in the morning is probably excessive for most people unless they have a long commute to school. However, schools that have implemented these late start times have seen significant student improvements.

Even the United States Air Force Academy is testing later start times for first year students and finding that those late-starting students do better not only during the first class of the day, but in all their classes. More school districts are starting to pay attention to these results, which is very good news for students.

What's in that sea water you just swallowed?

Photographer David Littschwager has captured this incredible image of a drop of seawater magnified 25 times.

You can read descriptions of what all these critter are at Dive Shield.

The world's most dangerous animals

What do you think is the most dangerous animal on Earth? To be more specific, which animal kills the most humans? Here's an infographic that might surprise you:

As you can see, number one and two, mosquitoes and other humans, completely dwarf any

Bill Gates (yes, that Bill Gates) put this graphic on his blog to kick off 'Mosquito Week' and bring attention to the problem of mosquito-born illnesses.

The pocket guide to bullshit prevention

Michelle Nijhuis has done us all the service of providing The Pocket Guide to Bullshit Prevention: 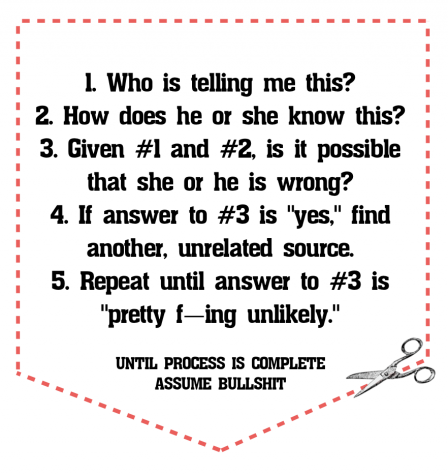 Nijhuis gives an example of how she uses this Bullshit Prevention Protocol (BPP) over at The Last Word On Nothing. It turns out although Beijing is very smoggy, the Chinese are not in fact televising sunrises so that their citizens will remember what the sun looks like.

Why can't we save stranded dolphins?

It’s tragic when whales and dolphins strand themselves on beaches. It becomes even more sad when, despite heroic efforts by teams of veterinarians and volunteers, the animals still don’t survive. Why do some dolphins swim away and others restrand themselves and die?

To find out, scientists led by Sarah Sharp of the International Fund for Animal Welfare (IFAW) and Tufts Cummings School of Veterinary Medicine and her colleagues analyzed data from stranded common dolphins. Common dolphin strandings are unfortunately common at Cape Cod, Massachusetts where the research was conducted. During a 2 year period, the researchers responded to 143 stranded common dolphins where the animal was still alive.

Upon arriving on the scene, IFAW vets took measurements and blood samples and performed physical examinations while quickly preparing the animal for transport to a suitable release site. All dolphins were released the same day they were found. A subset of these were tagged for satellite tracking. Dolphins that were still swimming around after three weeks were considered ‘survived’. Dolphins that died during the initial response effort (but after blood drawing) or that restranded themselves or were found dead within that 3 week period were considered ‘failed’.

The researchers found blood chemistry differences between the survived and failed groups. Anemia was a very strong indicator that the animal would not survive. Failed dolphins also tended to have cardiovascular abnormalities, pneumonia or liver disease. There were also differences in length to girth ratio in surviving versus failing dolphins.

All of this suggests that by the time a dolphin strands himself on a beach, he's probably beyond saving. In many cases, nothing can be done for him. There are animals that do survive, however, and identifying them is critical, especially during mass strandings, when responders must quickly decide which animals to save first and which to euthanize. The data collected by Sharp and her colleagues could become valuable triage tools for managing marine mammals.